Marcello loses his Harem, but he gains his Man Card

After shearing, I become concerned with Tulip’s body score. Momma here, with all of Tulip’s blanket gone, it was very apparent she was under weight.

It was time for Marcello to gain his “Man Card”. If Tulip had one less mouth to compete with for food, she would gain weight. The obvious choice was to remove Marcello and ask him to join the boys. I caught Mikayla yawning, and all of the other girls were pretty mellow, so Jared and I opened the gate and let Marcello out in the turn out with the boys before anybody noticed he was gone. Marcello didn’t even know he was gone!

“How did I get out with the boys?”

There are only five girls, so I put them in the boy’s paddock because it’s smaller, and then I put the boys in the larger north paddock. To the girls it was a big non-event, the view had changed, they noticed they were closer to the horses. 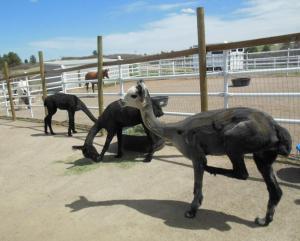 “I don’t remember the horses being so close.”

The boys were pretty sure Marcello was not allowed in their paddock, wait, did the paddock suddenly get bigger? 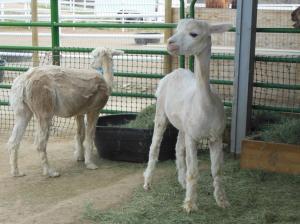 “Did our paddock get bigger?”

All that Tulip and I care about is the sudden abundance of hay for her, and wait just a minute, she’s got her own feed tub, too.

This entry was posted in animals and tagged alpacas, ranch life. Bookmark the permalink.