Posted on August 8, 2011 by cliffhousealpacas

Note: I’m out-of-town this week, so this post is going up automatically.

Timid Tulip was my least favorite alpaca, until I got to know her. And getting to know her wasn’t easy, since she is so shy and quiet. But having had her at the ranch now for almost a year, we’ve accumulated enough stories to know that she’s a sweetie (with a stubborn streak).

She has such a sweet face.

Until we got the big boys this summer, Tulip was our watch alpaca (Bravado has taken over that role). When the girls and their babies were out in turnout, she kept an eye on her surroundings, and let us know if anything was out-of-place. Deer, coyotes, bunnies…she alerted the herd with her alarm call when she spotted them. The funniest part of this whole alarm thing is that she looks at Mom when she does it. It’s almost as if she wants to be sure the two-leggeds are aware of the situation, so we can do something about it! 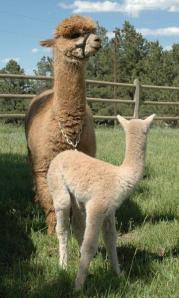 This was right after we bought her, and before she came home to the ranch. That's Tuscany in the foreground.

Her first cria (baby), Tuscany, was born at the farm we bought her from, because we hadn’t gotten our coyote-proof fencing up yet. Tuscany has grown up into a fine young gentleman with stong legs and soft fiber. Her second cria, who we all know and love, Tripoli, was born this summer. As a mother, I would describer her as…indifferent. Trip is pretty sure we’re trying to kill him when we pick him up to weigh him, but Tulip doesn’t even come in from turnout despite his crying!

Trip can be downright rude when he comes in to nurse, bouncing in and crashing into his mom demandingly. Tulip let him get away with that approximately zero times before putting him in his place with a well-aimed spit. Since then, he approaches quietly and slowly, and if he doesn’t, all Tulip has to do is pin her ears back and give him the eye, and he calms down. 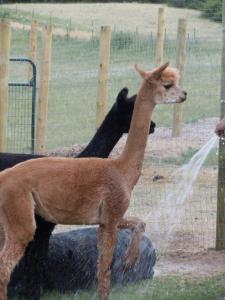 Tulip and Brittany play in the water while, like any sensible pregnant lady, Mikayla lays in it.

Our Tulip loves the water more than any of the other girls. The first time I emptied a bucket into the turnout and she came running over, I thought it was the strangest thing. She likes to tap dance in puddles. Really.

"Canyonland Sand", Tulip blended with "surino" which is an alpaca, merino blend.

Tulip’s fiber is a little shorter than the other girls, but has been the most consistent from year to year. I like to blend it with warm colors, to give it a bit of dimension. I’ve already spun her entire fleece this year!

Once upon a time, my dad drove by some funny looking animals standing on little dirt hills in a field. Thus, the dream of an alpaca ranch was born. Now, we are embarking on a grand adventure of raising alpacas and becoming fiber artists.
View all posts by cliffhousealpacas →
This entry was posted in animals and tagged alpacas, babies, crias, yarn. Bookmark the permalink.