Posted on December 20, 2011 by cliffhousealpacas

My Aunt Geri is an artist, a real one. We are lucky that lately she has been channelling her creativity into fiber art, rather than painting. The results have been astounding.

I’ve compared felting to painting, but my work is finger painting compared to Aunt Geri’s. In the work above, she used wet felting to blend Mikayla and Marcello’s fiber for the background, then used needle felting for the horses. This piece recently sold to our farrier’s wife (he’s the guy who puts shoes on our horses). 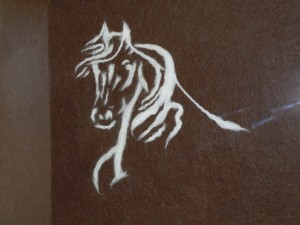 Felting isn’t the only thing Aunt Geri does, in fact, it’s a recently acquired skill (I know, it doesn’t look like it). She also knits. She can knit reversible hats and scarves, scarves in a variety of stitches, and hats with patterns. 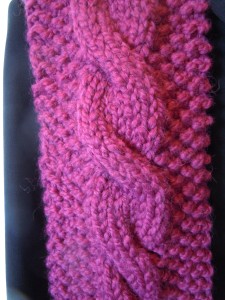 Aunt Geri is our go-to gal for oddball special requests. She often makes up her patterns as she goes, and is dedicated enough to redo a work many times before she is satisfied with it. 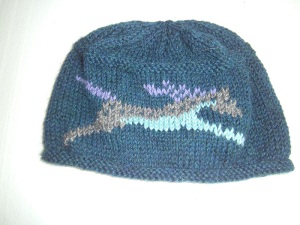 Aunt Geri and Uncle Jerry live in a tiny town in Wyoming, where winters are long and nothing keeps you warm better than knitting. I love them both dearly.

Once upon a time, my dad drove by some funny looking animals standing on little dirt hills in a field. Thus, the dream of an alpaca ranch was born. Now, we are embarking on a grand adventure of raising alpacas and becoming fiber artists.
View all posts by cliffhousealpacas →
This entry was posted in fiber art and tagged felt, felting, hats, knit, knitting, scarf, scarves, yarn. Bookmark the permalink.