The parts of a spinning wheel…

Posted on January 23, 2012 by cliffhousealpacas

…have hilarious names. I couldn’t decide which was funniest, so I decided to share them all with you.

Let’s start at the bottom and work our way up. The twist in yarn is originally generated by your foot pressing the treadle. My wheel only has one treadle, but some have two. Pressing down on the treadle pulls down the footman, a long piece of wood that is connected by a leather strap to the treadle and by an elbow shaped arm to the wheel itself. The bench, which is level on bigger wheels, holds the wheel and the mother-of-all (that’s everything in the white box in the diagram).

The mother-of-all is where the names start to get funny. Two maidens, the vertical posts, hold the flyer. The flyer is the part that has the hooks on it, which winds the yarn on to the bobbin. Bobbins are super-sized versions of thread bobbins. 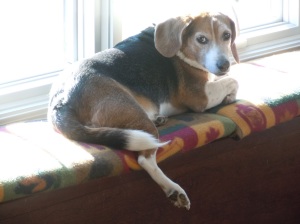 This is also a Bobbin. That's the beagle's name, Bobbin. Awwwwww.

The tension knob controls how fast the yarn winds onto the bobbin, by tightening the Scotch brake. This piece of twine slows down the bobbin by friction. And finally, the yarn passes through the orifice before it is wound on by the flyer.

The orifice is where all the action happens. My orifice is enormous, and large things fit through it (snicker), like beads and feathers and artsy fartsy yarn. I have to start by using the orifice hook, a little iron hook that’s stored on the bench near the wheel, to thread my leader through the orifice.

I visited my local yarn store the other day to pick up a second orifice hook. There was only one, and it had no price. The saleslady and I had a heck of a time finding it in inventory, because it was listed under “threading hook”. I guess “orifice hook” was just a little too vulgar for a product name. It looks like I’m not the only one who has naming wars with marketing. 🙂

BTW: Quick shout out to Sherry Harder, for taking that beautiful photo that I covered up with a bunch of ugly callouts. Here it is in full glory, 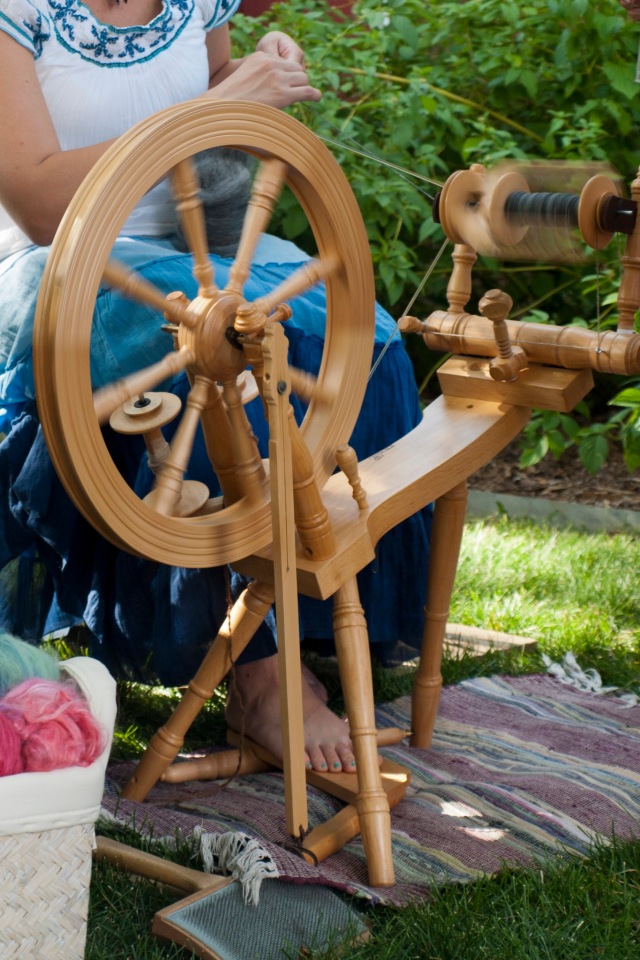 Once upon a time, my dad drove by some funny looking animals standing on little dirt hills in a field. Thus, the dream of an alpaca ranch was born. Now, we are embarking on a grand adventure of raising alpacas and becoming fiber artists.
View all posts by cliffhousealpacas →
This entry was posted in fiber art and tagged hand spinning, handspinning, handspun yarn, orifice hook, parts of the wheel, spinning, spinning wheels, yarn store. Bookmark the permalink.