Posted on January 25, 2012 by cliffhousealpacas

Bravado may be my favorite of our alpacas, and it has nothing to do with his fiber (which I haven’t even spun yet). He’s a suri alpaca, unlike the rest of our herd, who are huacayas. Instead of being fluffy his hair is heavy, fine and drapey. We used to call him surfer dude because his scruffy top knot made him look chill. Then we got to know him better and found out his personality is anything but relaxed.

Bravado is a happy camper, he just got to play in the water.

Bravado is always alert to his surroundings, and quick to sound the alarm, which is the most high-pitched cry of the whole group. The first thing he did when we let him into the turnout after a snowy couple of days was investigate every corner, even going through an open gate into the empty paddock and the shelter there to make sure everything was in place. Bravado’s also not a particularly good sharer, though the boys all know his bark is worse than his bite. And he’s the only alpaca I know that growls. 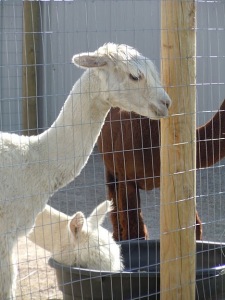 Bravado’s pretty mad at me right now. When I was home over the holidays, my dog Derby was feeling left out so I brought him out to the barn, where he proceeded to run around and bark at everything. The horses scared the living daylights out of him, but he figured he could take the alpacas. Long after Derby had been banished to the house, Bravado watched me accusingly, and refused to come anywhere near me even when I had crumbles.

So long story short, I think I love him because he reminds me of myself: pushy, unfriendly, obsessive-compulsive, and easily spooked.

Once upon a time, my dad drove by some funny looking animals standing on little dirt hills in a field. Thus, the dream of an alpaca ranch was born. Now, we are embarking on a grand adventure of raising alpacas and becoming fiber artists.
View all posts by cliffhousealpacas →
This entry was posted in animals and tagged alpaca, alpacas, herd dynamics, ranch life, suri, suri alpaca. Bookmark the permalink.