Posted on April 10, 2012 by cliffhousealpacas

Last week, I mentioned one of the wildfires burning in our area. There have been three already this season, though none of them were near enough to threaten us. Over Easter dinner, I talked with the family about the Ranch’s evacuation plan. 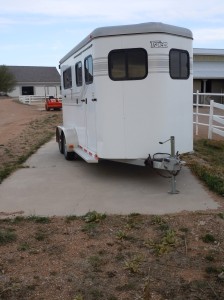 The math is simple. We have one trailer that holds 2 horses or 6 alpacas. We have 10 alpacas, 2 horses, 3 barn cats, and 2 dogs. To evacuate all the animals on the Ranch, we’d need to take three trips in our trailer, or recruit two other friends with trailers. As I mentioned in the comments before, Mom and her horse friends are on each other’s speed dial, and are ready to show up at each other’s places to evacuate at essentially any time.

We aren't in the trees or anything, so we'd be more concerned about a grass fire.

Now, it takes about 11 minutes to get from the Ranch to the county fair grounds. During emergencies that’s where everyone takes their livestock, since they already have pens and such. Lets give ourselves another 5 minutes to load the animals in the trailer, and 5 to unload at the fair grounds (which is being kind of optimistic, but one year the horses lived with our name braided into their hair so if we had to evacuate suddenly, we wouldn’t have to worry about losing them after unloading). If we were on our own completely, it would take us about an hour and a half to get everyone to safety. With help, we could probably do it in half the time.

The harsh truth is you can’t evacuate animals without lead time and sometimes you don’t have that. In sudden emergencies, such as tornadoes, the best thing to do is actually let the animals loose. Better to round them up from someone else’s land later than to trap them in a bad situation.

I’m looking for a positive note to end on here and not finding it, especially given the abysmal 80% success rate of reverse 9-1-1 calls telling people to evacuate during the recent fire. Pretty much the best I can do is this: we are prepared to do everything in our power to get the animals and ourselves to safety in an emergency. We can’t do anything else. I guess the rest is faith or fate.

Once upon a time, my dad drove by some funny looking animals standing on little dirt hills in a field. Thus, the dream of an alpaca ranch was born. Now, we are embarking on a grand adventure of raising alpacas and becoming fiber artists.
View all posts by cliffhousealpacas →
This entry was posted in animals, business and tagged alpacas, animals, cats, disaster, dogs, emergency preparedness, evacuation, fire, horses, natural disaster. Bookmark the permalink.