Posted on November 13, 2012 by cliffhousealpacas

Today’s bio is of my Aunt Geri. She is one of those amazing people who is an artist in many mediums.

Geri has a life-long passion for art and horses. She has been drawing as long as she can remember, beginning with sketches of horses in elementary school. Geri held “one-man” art shows in high school and has continued to enter her work in local art shows with resulting awards and commissioned pieces.

Aunt Geri discovered the art of needle-felted alpaca fiber from my trials and tribulations. She has joined Cliff House Alpacas, offering her significant knitting skills. In addition to knitting Geri has more recently taken up the art of spinning. 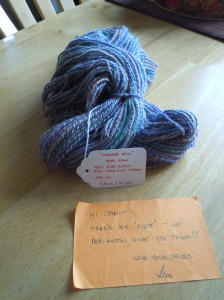 It’s hard to even list all the pieces at the show that Aunt Geri worked on. There will be scarves, hats, felt art, and yarn, at least.

Once upon a time, my dad drove by some funny looking animals standing on little dirt hills in a field. Thus, the dream of an alpaca ranch was born. Now, we are embarking on a grand adventure of raising alpacas and becoming fiber artists.
View all posts by cliffhousealpacas →
This entry was posted in business and tagged artist bio, bazaar. Bookmark the permalink.