My brother’s weekend on the ranch

Posted on January 14, 2013 by cliffhousealpacas

My poor brother pulled alpaca-sitting duty on the coldest weekend we’ve had so far this winter. The wind was howling hard enough to tip over full buckets of water, the alpacas were feeling snippy and the kitties were feeling needy. 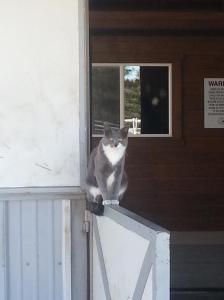 When it was warm enough, the kitties followed my bro around the ranch like shadows. Mom and Dad had abandoned them for a weekend retreat, and they were sure as heck not going to get left behind again! Most mornings, though, they weren’t even interested in leaving their heated cat palace.

Meanwhile, Bravado had appointed himself as the “fun police”. Absolutely no fun was to be had in his presence. None. Whenever Tripoli and Morocco got a game of “bump and run” started (which is just what it sounds like, they run around bumping into each other), Bravado would immediately run over and break it up. 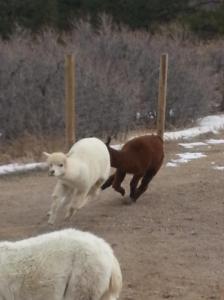 We’re due for some warmer weather soon. Hopefully we’ll climb above the freezing mark tomorrow. And I spent the weekend holed up with my crochet hook, so I have finished project to show you on Wednesday!

Once upon a time, my dad drove by some funny looking animals standing on little dirt hills in a field. Thus, the dream of an alpaca ranch was born. Now, we are embarking on a grand adventure of raising alpacas and becoming fiber artists.
View all posts by cliffhousealpacas →
This entry was posted in animals and tagged alpacas, animals, bump and run, cats, cold, ranch life, weather, winter. Bookmark the permalink.

2 Responses to My brother’s weekend on the ranch