I knew there was a reason I’m scared of bears

Posted on August 23, 2011 by cliffhousealpacas

First, you should know that everyone is alright. Now, here’s the story.

My big little-bro is home from his summer job, and not yet back in college. He and a buddy were hanging out at the ranch one evening last week, before heading out to another rabble-rousing night at the Village Inn. The sun had just set, and the evening light was fading as they came out of the garage. Across the arena, both boys could see something big and wrong standing on the cement pad on the north side of the barn. “Dude. What is that thing?” “Dude. That’s a bear.” And just like that they were running at it, screaming their heads off and waving their arms, climbing over the arena fences like orangutans.

The bear, an adult black bear, turned and just looked at them. He calmly evaluated the situation (bro says “I could see his eyes in his big fuzzy face. He was just staring at me.”). Then he turned and loped off down the ravine. 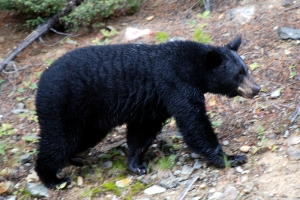 My brother is hard to scare. He’s even keel about things like bears, tornadoes, allergic reactions, car accidents….but when he and his buddy came back inside after their bear altercation, he was shaken. “Dude. Big bear. I don’t know man.” It’s no wonder really. The alpaca paddock, where the babies are, is on the north side of the barn, not 15 steps from where the bear was standing, looking into the breezeway. We’re pretty sure he was actually investigating the ‘smell-ables’ in the barn, you know, fly spray and such, but still. Scary.

Our place seems to sit on a wildlife corridor of sorts, the only property between two multi-thousand acre ranch plots. We see all sorts of predators: coyotes, bobcats, and bears. But this is the first time any of them have seemed interested in the barn. Mom and Dad cleared out anything with an interesting smell, so hopefully it’s the last time as well.

Once upon a time, my dad drove by some funny looking animals standing on little dirt hills in a field. Thus, the dream of an alpaca ranch was born. Now, we are embarking on a grand adventure of raising alpacas and becoming fiber artists.
View all posts by cliffhousealpacas →
This entry was posted in animals and tagged alpaca, alpacas, bears, black bears, crias, ranch life. Bookmark the permalink.