“A dead squirrel on his head”

Posted on October 24, 2011 by cliffhousealpacas

On Sunday, I spun Marcello’s fiber for the first time! It’s an order from a friend, a search and rescue guy in need of a warm, weather proof hat. Mom called before she sent the batts up, afraid that since Marcello’s color is somewhat flat, the finished product would look like, and I quote: “A dead squirrel on his head.” So I spiced it up with some of Tuscany’s fiber. 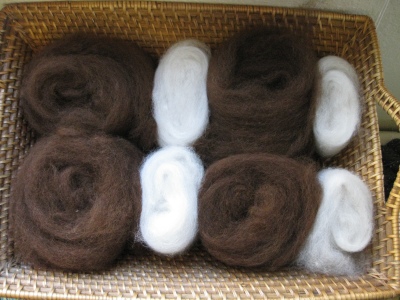 Actually, I found Marcello’s fiber easy to work with and surprisingly fluffy. It had good loft, which should add to the warmth of the hat. Tuscany’s fiber has much more crimp and length, but the two complement each other well. I spun them as a marled yarn, holding both colors at once. It was hard, since I had half as much Tuscany to work with and the two have very different characters.

The best way to describe Tuscany's fiber, as you spin and relative to Marcello, is "sticky". It clings to itself instead of slipping out of your hands.

I never spin when I’m unhappy, and when I’m spinning for someone I know and care about, I try to spin my care for them into the yarn. As I work, I think about the fun times I’ve shared with the person and who they are on a fundamental level, both good parts and bad parts.

I think about their future as well. Where will this hat be worn? What challenges will this person be facing when he has it on? If there is one thing I could wish for this person, what would it be? Then I try to spin my hope that they will overcome those future obstacles into the yarn. To me, it even feels like the character of the yarn reflects these hopes.

I’ve named this yarn “Deep Roots”. It is bulky, semi-worsted yarn, consistent, strong and warm. I spun it for a guy who is strong, but could probably use a bit of help in the consistency department. My hope for him is that throughout all his ice climbing, mountaineering, outdoorsy adventuring, he recognizes the value of deep roots.

Wow. Ok, feel free to get off the crazy train now.

Once upon a time, my dad drove by some funny looking animals standing on little dirt hills in a field. Thus, the dream of an alpaca ranch was born. Now, we are embarking on a grand adventure of raising alpacas and becoming fiber artists.
View all posts by cliffhousealpacas →
This entry was posted in fiber art and tagged alpaca yarn, art yarn, hand spinning, hand spun, handspun, knitting, marled yarn, spinning, yarn. Bookmark the permalink.

4 Responses to “A dead squirrel on his head”