To block or not to block, that is the question

Posted on November 8, 2011 by cliffhousealpacas

Poor Hamlet, always getting his soliloquy wantonly garbled by bloggers. Mmmmm, wontons. Anyway, this weekend I spun 50 more yards of my deep roots yarn and finished the hat for my climbing friend. And it looks nothing like a dead animal, I might add.

It might be just a touch too big. I measured climbing guy’s head, and was surprised to find that it’s exactly the same size as mine. I had guessed his head would be unusually large, but it turns out that’s mostly attitude 😛 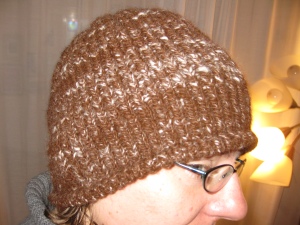 I was already having a bad face day, now I'm having a bad hair day too. The things I do for this blog, I swear.

So I think I’m going to block it. Honestly, I seldom go through the trouble of blocking my knitting, but it’ll help. Blocking is basically just washing, with a little bit of agitation that evens out the stitches, and then drying on a form that is roughly the same size and shape as a head. I think a balloon will approximate his head quite nicely. Snicker.

I did something a bit different so the hat will fit nicely under climbing guy’s helmet. Normally, loom-knit hats are just tubes with one end cinched shut. The number of stitches is the same from the bottom to the top. I was afraid that the gathered material at the top would be uncomfortable under a helmet, so I actually decreased my stitches as I finished up the hat.

Wouldn’t want climbing guy’s surprisingly average sized noggin to get bonked by a rock because his helmet wasn’t fitting right, now would we? I doubt it would even knock any sense into him.

Once upon a time, my dad drove by some funny looking animals standing on little dirt hills in a field. Thus, the dream of an alpaca ranch was born. Now, we are embarking on a grand adventure of raising alpacas and becoming fiber artists.
View all posts by cliffhousealpacas →
This entry was posted in fiber art and tagged hand spinning, hand spun, hand spun yarn, hats, knitting, rake loom, yarn. Bookmark the permalink.

1 Response to To block or not to block, that is the question