Posted on June 7, 2012 by cliffhousealpacas

Instead of trying to make that gold beaded yarn that has me so un-inspired, I decided to use the same singles with these new, metallic copper beads. The warm color of Tuscany’s fiber reminded me of sandstone and the Sahara, hence the somewhat random name.

Technically, they’re the same singles, so I’ll likely have just as much trouble getting them to balance, but maybe the new bead color will be enough to get me started. I’ve only had time to string the beads so far. 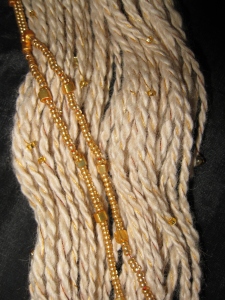 Here’s a shot of the failed gold bead yarn with the copper beads on top. I think that since they aren’t clear, they’ll pop more against the yarn. There’s nothing worse than spending all that time to get beads into a yarn only to have them swallowed by it.

Once upon a time, my dad drove by some funny looking animals standing on little dirt hills in a field. Thus, the dream of an alpaca ranch was born. Now, we are embarking on a grand adventure of raising alpacas and becoming fiber artists.
View all posts by cliffhousealpacas →
This entry was posted in fiber art and tagged art yarn, beaded yarn, beads, copper, copper beads, handpsun yarn, handspinning, metallic copper, yarn. Bookmark the permalink.