Posted on June 11, 2012 by cliffhousealpacas

We’re ba-ack! Mom, Dad, Aunt Geri, Uncle Jerry and I spent the weekend communing with fiber denizens of all stripes. Alpacas, goats, paco-vicunas (a breed of alpaca), sheep and llamas were all represented. In addition to the displays by various ranches and stores, there were animal judging, fleece judging, sheep dog demonstrations, shearing demonstrations, animal training competitions, and handspinning competitions. 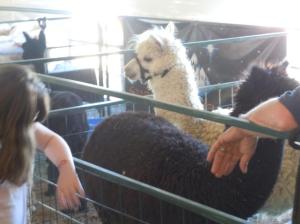 The alpaca tent had products (including fleeces) for sale, the alpaca fleece contest, and of course, alpacas!

We spent at least half of Saturday in the alpacas tent, chatting with old friends and making new ones. The alpaca ranching community is small enough, we’ve met many of these folks before, and it’s nice to catch up. We strolled the aisles of the vendors’ barn for hours, scouting out the best deals. Then, on Sunday, we returned to make a few purchases (much more on that tomorrow!!).

Bags of fleece for sale. We did buy three, in colors that we never have enough of.

Sunday was much quieter, which was nice for us and probably frustrating for the vendors. The results from the handspinning contest were in, so Aunt Geri and I talked with the judges and examined the excellent work on display. We quickly decided that we could totally enter that contest next year; we are both perfectionists to the extreme.

We learned a ton, and hopefully gained the confidence we need to be more active participants next year. At least we know we’ll enter the handspinning contest.

I have a few more posts lined up from the show. I can’t wait to show you what I got!

Once upon a time, my dad drove by some funny looking animals standing on little dirt hills in a field. Thus, the dream of an alpaca ranch was born. Now, we are embarking on a grand adventure of raising alpacas and becoming fiber artists.
View all posts by cliffhousealpacas →
This entry was posted in animals, business, fiber art and tagged alpacas, art show, compettions, estes park, fiber show, goats, handspinning, handspun yarn, llamas, ranching, sheep, spinning, wool market. Bookmark the permalink.