Round Three or it seemed like a good idea

Posted on March 29, 2013 by cliffhousealpacas_dad

Jan’s on today, I’m talking about a scarf I have started three times and completed once. This yarn is mill spun, sport weight, 100% alpaca, and it first started out as a scarf with Pandora beads knit into it. I don’t have a picture of the original, let’s just say the beads were too heavy for the yarn, and they weighed down the individual strands like a heavy weight in a fishing net. I knew the scarf wouldn’t sell when we go to market so I decided to remake it. I’ve set aside five scarves to remake this year, and I’m finished with two of the five.

I tore out the scarf, remember it’s a simple piece of string, and decided to knit a very thin strand of 50%  superfine alpaca and 50% Tencel into the yarn. I used my purple loom, it seemed like a good idea at the time. I was pretty sure the weight of the yarn would require a large peg spaced pretty far apart, I was wrong.

I tore out the scarf a second time, by now feeling a little silly, and began on my blue loom. This is the loom I use when I knit my shawls. The pegs are smaller and closer together producing a tighter and more tailored stitch. I hope you can see the difference. Third time’s a charm! 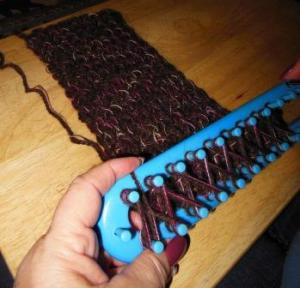