Posted on February 8, 2013 by cliffhousealpacas_dad

Last Sunday when everyone in the US was watching the Super Bowl, drinking beer and eating guacamole dip Gordon and I were in our barn participating in Cliff House’s skirting bowl. We had no beer and no guacamole dip.

This time of year is the perfect time to clear out our “fleece closet”. Our local fiber mill is not as busy now. They will be crazy nuts in May, and Andrew, the mill’s owner can get our processed fiber back to us quickly.

After rolling the baby fleece out on the table it became apparent why many alpaca breeders don’t use the first year’s fleece.  Amniotic fluid remains on the fiber’s tips until the first shearing, and collects everything.  This includes dust, vegetable matter, poop and sunshine(the tips of the hair sunburn badly). The trade off in time was certainly worth it with this fleece.  An alpaca’s first year’s fiber is certainly the softest and most crimpy. 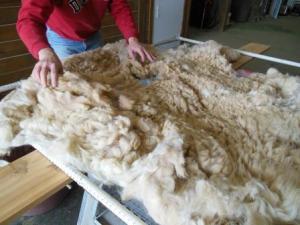 What a difference a year makes. In 2006 Clovis Mae’s fiber was fantastic.  It is brilliant, crimpy and soft. The skirting process removes as much as possible, the nasties you don’t want in the final product. This includes pulling out the guard hair, hair that is longer, stiffer and coarser than the rest of the coat.

A handful of guard hair

In 2007 we noticed more second cuts than the previous two years. Second cuts are very short pieces that were cut in a second pass over the alpaca after cutting the long parts (the majority of the fleece) off. Because there is no length to the second cut it can’t be spun. 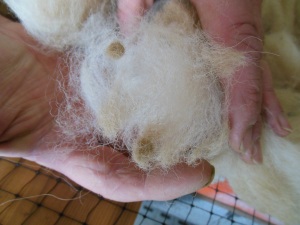 Of the last two years of fiber 2008 stood out. There was very little vegetable matter, no dust or dirt and very few second cuts.  Her guard hair was softer than our Tulip’s prime fleece. 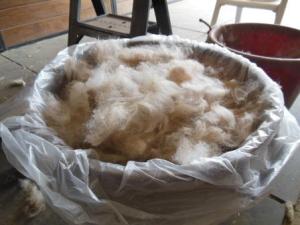 Gordon and I scored five bags, approximately twenty pounds, of prime fleece during our skirting Super Bowl. We plan on making this into spools of lace weight yarn to be used on a digital knitting machine. We have big plans down the road!